In a marathon Resource Planning Committee meeting, everyone had a chance to weigh in on the proposed Quarry RV Park project Thursday. Committee staff gave their assessment of whether the proposal complied with relevant regulations and zoning ordinances. Mike Parent and Tom Goelz, the developers, were joined by project engineers and an appraiser to argue in favor of the proposal. They got 90 minutes to make their case before the committee, followed by a lengthy question and answer session. Then the Bay Shore Property Owners Association was allowed 90 minutes. They chose to have several residents each speak to various aspects of their case for why the project should be rejected. Public comment saw ten people weigh in, all opposed to the development. Finally, there was a rebuttal session in which each side was only allowed to address points made by the opposite party. The meeting lasted over eight hours.

Parent and Goelz were adamant they did not get a fair shake at last month’s meetings before the Sevastopol Plan Commission and Sevastopol Town Board. Goelz said Thursday was more equitable, but the project continues to be held to a high bar.

The committee will reconvene Wednesday at 1 PM in the Peninsula Room of the Door County Government Center. 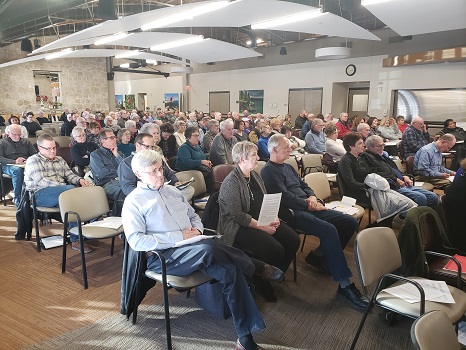 The hearing was held in the ADRC Building on 14th Avenue in Sturgeon Bay.