Posted About One Year Ago by Tim Kowols

Residents in Door and Kewaunee counties will have more opportunities for food assistance courtesy of Feeding America and the United States Department of Agriculture. The Kewaunee County Food Pantry in Algoma announced it will be hosting another Farmers to Family food distribution event on March 25th after hosting one on February 25th. The Door County Food Pantry Coalition and the United Way of Door County will host similar events in Sturgeon Bay and Sister Bay on March 12th and 26th. Over 1,500 Farmers to Families food boxes were distributed last week between the two counties. United Way of Door County Executive Director Amy Kohnle says it shows the need is still there. 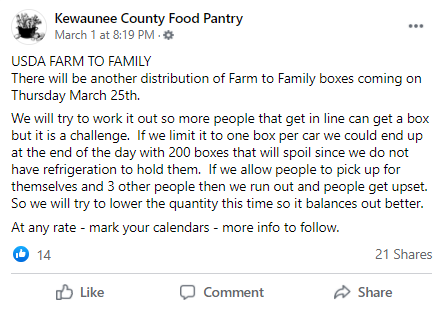