Posted About Three Years Ago by Paul Schmitt

The Luxemburg-Casco Spartan girls hung on to win in overtime over the Green Bay Southwest Trojans Saturday night 76-74 in a WIAA Divional 2 Regional final in Luxemburg.  It was sweet revenge for the Spartans as the Trojans had knocked L-C off last year with an overtime comeback win.

Luxemburg-Casco fell behind by as many as ten points in the first half before going on a 14-3 run to take a one-point lead into halftime on a three pointer by freshman Lauren Adams right before the buzzer.

The second half saw the Spartans go up by as many as seven points but Southwest battled back to force the overtime as both teams failed to hit any shots in the last minute.

In overtime, Adams scored seven points and Jenna Jorgenson added six including four clutch free throws to clinch the game.  The Spartans fouled Jadden Simmons on purpose to prevent a three- point tying shot in the final seconds. Southwest then could only manage a last second 50-foot heave by Simmons that fell well short as the #1 seeded Spartans escaped with the two-point victory.

The Spartans (20-4) were led by Cassie Schiltz who scored 28 points while Jorgenson added 21 and Adams chipped in 18.  Simmons paced the Trojans with 31.

The next Spartan girls’ basketball game broadcast on WBDK 96.7FM will be Thursday in a Sectional semifinal game against #2 Notre Dame.  Matt Piesler and Paul Schmitt will have the call starting at 6:45 p.m. with the pregame show and tip-off at 7pm.  Game audio can also be streamed on DoorCountyDailyNews.com. 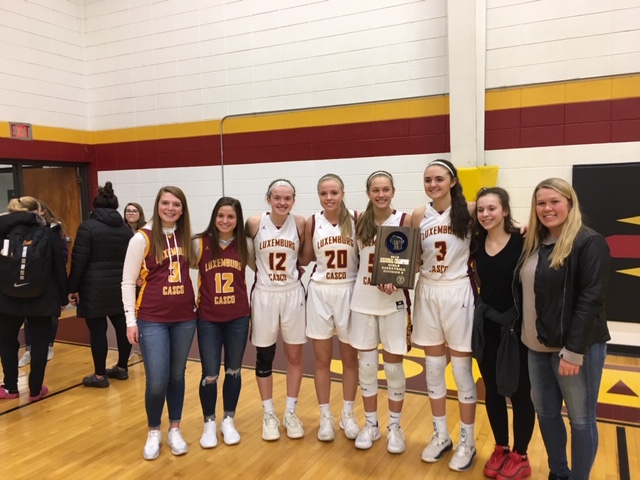