Posted About Two Years Ago by Ryan Heise, Village of Egg Harbor Administrator

In 2017, I found myself bouncing down the highway toward Madison, in hopes of receiving grant money to engineer an aspirational beach project, which was not yet fully envisioned. I returned to Egg Harbor hopeful, and for good reason, the Village had received $32,000.00 from the Coastal Management Program.

A year later, I found myself headed back to Madison, with a community developed plan in hand. Once again, in front of the Coastal Management Council, I pleaded my case and held out my hat, on behalf of the tax payers of Egg Harbor. The plan touted: a 50% increase in beach frontage, ADA accessibility to the waters edge, recessed beach that would stay above the extreme high water levels, a stone revetment for seating, and more. Little did I know that representatives from the Fund for Lake Michigan (FFLM) were also in the audience. They liked the project and encouraged me to apply for funding from their program as well.  In response to our application, the Fund generously provided a grant of $120,000.00 to assist with construction costs. The contribution was meaningful and provided the catalyst to move the project forward, a project which may otherwise have been acknowledged as a good idea but remained on paper year after year.

“The Fund for Lake Michigan is thrilled to assist with this exciting project in Egg Harbor,” said FFLM executive director Vicki Elkin. “Providing citizens with access to healthy and safe beaches is a key component of what we do.”

The engineers on the project, SmithGroup JJR were as one would hope, wise and professional. The project was not without its problems, not uncommon with projects of this scale, but as issues appeared they were calmly worked through and managed. A kind thank you to SmithGroup, for capturing the Village’s wants and wishes, and manifesting them within the project.

And to the builders, the doers, and staff who ensured that the project was built with an eye for detail, thank you for your wonderful work. And a special thanks to Rass Excavating, of Sturgeon Bay, who was awarded the project through a public bidding process.

Now, the Village decision makers can take pride in a comprehensive plan that received incredible stakeholder feedback, and the Trustees feel empowered, knowing that the vast majority of people support improving existing amenities, especially those that strengthen our connection to the outdoors. Looking forward, all eyes turn toward the Alpine Resort, with the potential acquisition of an acre of property. This purchase would allow for: additional parking, moving a wastewater pump station currently located in the center of the beach, expanded beach area, an improved breakwater pier, and could serve as a trailhead for a recreational path to be designed. 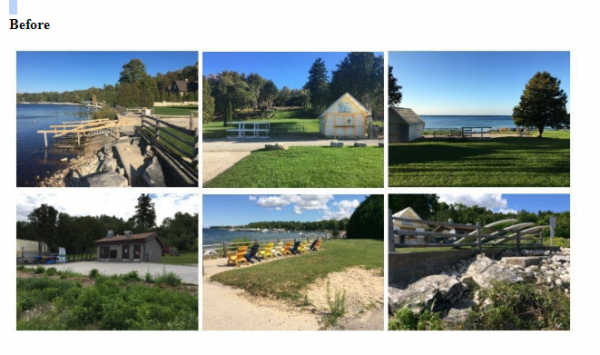 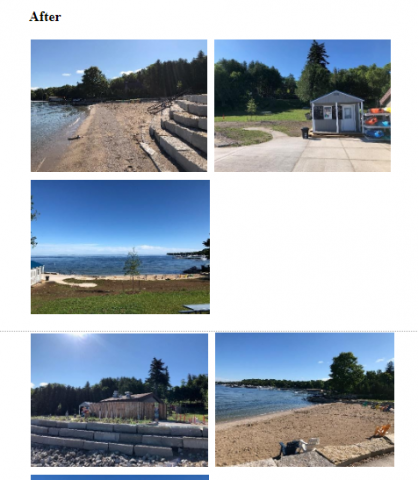