Posted About One Year Ago by Terry Kovarik and Paul Schmitt

Time and the elements have left the Observation Tower at Potawatomi State Park in Sturgeon Bay beyond repair or renovation.  The Department of Natural Resources says the 75-foot high tower will be deconstructed.  The wooden structure was built in 1932.  It was closed to the public in 2017 over structural safety concerns.  The Sturgeon Bay Historical Society hired an independent timber consultant to determine whether the tower could be salvaged.  Dr. Dan Tingley, a noted engineer, determined the structure could be repaired for $250,000 within ten days this spring, according to SBHS president Christie Weber.  Mike Bergum, DNR District Supervisor for the East-Central District, says a local engineering firm sealed the tower's fate.

Bergum says the DNR is looking to the future with park friends groups and other supporters to find replacements for the now condemned observation tower,

A demolition time frame and a final decision of what will become of the tower's wood have not yet been decided.

Press Release by Wisconsin DNR is below. 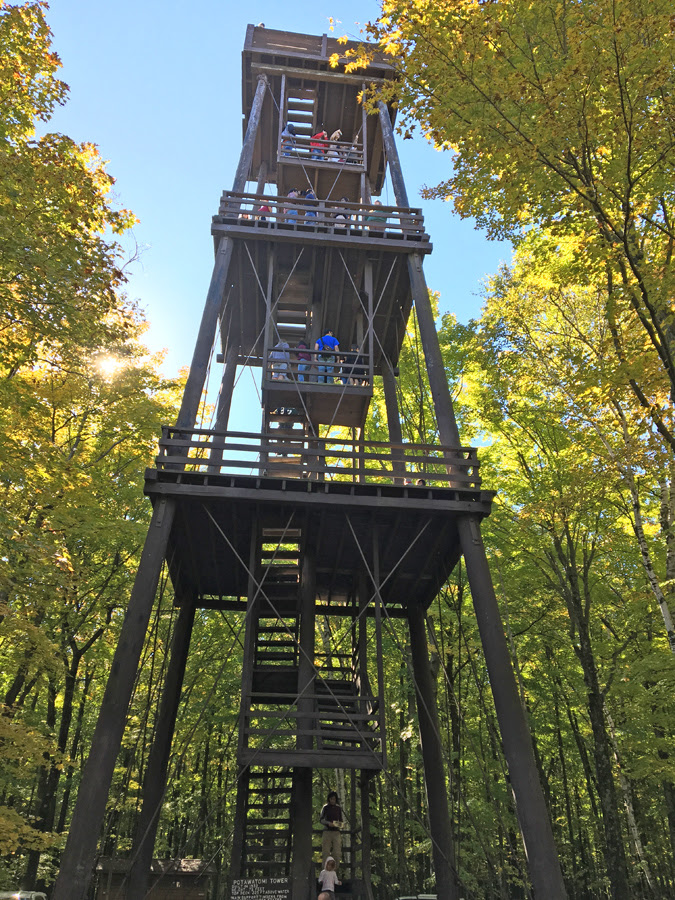 The observation tower at Potawatomi State Park will be dismantled after three separate studies found decay and rot in the structure that was built in 1932. - Photo credit: DNR

Routine inspections of the Potawatomi tower were conducted in the spring and early winter of 2017. During these inspections, park staff found visual decay and movement of the structural wood tower members. DNR engineering staff were brought in and conducted additional inspections and recommended further review. Constructed in 1932, the 75-foot tower was closed for the season in December 2017.

"The observation tower at Potawatomi State Park is an important way for people to experience this park. It is our responsibility to provide these opportunities as well as protect public safety," said Ben Bergey, director of the Wisconsin State Park System. "Decisions such as this are not easy. The science tells us the tower needs to come down; however, we are working with our partners to explore future opportunities."

In February 2018, the U.S. Department of Agriculture Forest Service Forest Products Laboratory conducted a visual inspection using non-destructive methods to determine the condition of the wood members and the structural integrity of the tower. Lab officials found significant decay in the structural and non-structural wood members of the tower and recommended that the tower be closed to the public and dismantled. The tower was permanently closed in the spring of 2018.

The Sturgeon Bay Historical Society also commissioned an assessment of the tower that reviewed only the structural members of the tower and determined that the tower could be repaired by replacing compromised structural components with new wood elements.

In the fall of 2019 the DNR, with coordination from Wisconsin Department of Administration, solicited bids for a third-party independent consultant to review the two reports and provide their assessment and conclusions regarding the tower. The department received their report in January 2020. The report outlined the following possible options to address the existing Potawatomi Tower: Repair the tower by taking it down and putting it back together with new wood; repair the tower in place; or replace the tower with a new tower.

The department legal team determined that all three options outlined in the report would require the tower to be physically accessible in accord with the Americans with Disabilities Act. As such, the department has made the decision to deconstruct the existing tower and work with partners, including the Sturgeon Bay Historical Society, and the public, to explore a future, accessible observation opportunity at the park according to the park's existing master plan.

Potawatomi State Park is located on the shore of Sturgeon Bay in southern Door County, has 1,200 acres of gently rolling upland terrain bordered by steep slopes and rugged limestone cliffs. The park is named in honor of the tribe that inhabited Green Bay's shores. The tribe called themselves Bo-De-Wad-Me which means "keeper of the fire." Eventually the spelling and pronunciation were changed to Potawatomi.