Posted about a week ago by Grant Dossetto

Through the spring and summer, those needing comradery to help deal with mental illness had limited options at JAK’s Place in Sturgeon Bay.  Program Director Sam Burriss says that an outdoor seating area and fire pit allowed those picking up the traditional Tuesday meal to find fellowship.

Both the Wisconsin Interscholastic Athletic Association and the Centers for Disease Control have pointed to recent studies showing elevated levels of depression and suicidal tendencies in children and young adults. Burriss says the center has a youth group that has been able to meet outdoors weekly, putting it in an excellent position to get out in front of that trend. The group also has a weekly men’s meeting on Fridays since they tend to be more susceptible to severe depression. Another group that has gotten going in recent years that is tied to JAK’s Place meets at McDonald’s on Egg Harbor Road in the parking lot. Indoor activities restarted in early September.

The organization is set for its largest fundraiser of the year, happening mostly virtually on Tuesday, September 22nd. Burriss says JAK’s Place has modeled its fundraiser to run similarly to the efforts of Third Avenue Playhouse from earlier this year. The event is capped off with a spaghetti dinner. Burriss encourages those who want a plate to purchase tickets in advance. 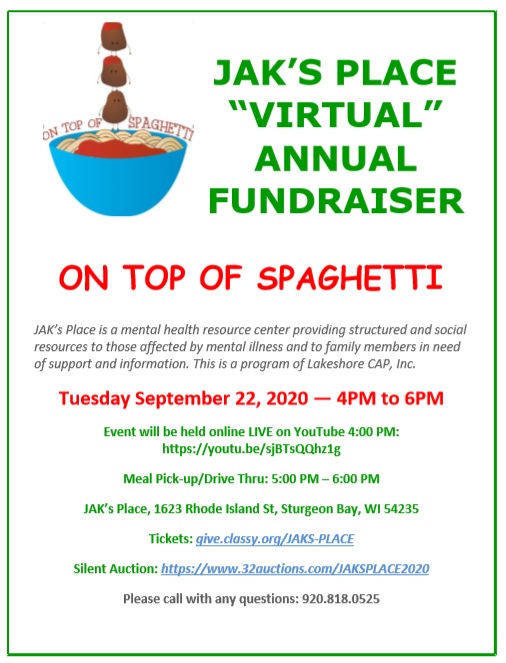